Eighteen years ago Irish beef farming was stunned by the sudden death of Noel Keating founder and MD of the Kepak Group. At the time Kepak was growing at a phenomenal rate.

Today Noel Keating’s legacy lives on as the Kepak Group continues to innovate. The company gave an industry lead some years ago with the establishment of the KK (Keenan/Kepak) Beef Clubs. This was the first real industry effort at tailoring a section of Irish beef production to suit the high priced Italian market and thereby earn a significant price premium to the farmer.

Putting its money where its mouth is Kepak’s own feedlot on the Dublin Meath border specialises in Italian beef. The 2,200 place feedlot proved a major attraction at the Irish Grassland Association beef outing last week
Ironically to produce the specialist pink lean and white fat carcases for Italy demands that top quality young suckler heifers and bulls are finished on a non grass diet. Most of the 320 hectare Kepak farm is in a tillage rotation of wheat, barley and maize silage all of which are fed on site to finish about 3000 heifers and 2000 bulls a year. The finishing period is minimum 120 days and all cattle are slaughtered under 22 months. Most are killed at 18 months. Maximum carcase weights are 460 kg (670 to 770 kg live) for the bulls and 380 kg (550 to 650 kg live) for the heifers. 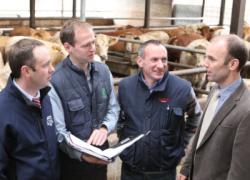 Feedlot manager Greg McCluskey outlined the strict veterinary, feeding and animal welfare regime which is delivering high growth and keeping mortality down to less than 0.5%.

The continental bulls and heifers are purchased from all over Ireland, 45% on farms, 55% through marts, at 12 to 17 months of age. Heifers range from 380 to 500 kg and bulls from 380 to 600 kg. Currently the lighter animals are costing €2.30 to €2.50 a kg and the heavier bulls about €2.16 a kg. They are purchased to grade R or better. Some heifers may be grazed for a period but the bulls go directly into the feedlot.

On arrival the bulls/heifers are rested on a straw bed and;
– Vaccinated against BVD, RSV, PI3 and clostridial diseases.
– Dosed for fluke/worms.
– Weighed graded and tagged.
– Tails and backs clipped.
– Sprayed and groups according to weight.
– Details recorded on computer.

Bulls are then penned either on straw or rubberised slats in maximum group size of ten. This group is kept together right through till slaughter. Heifers are penned on standard slats but rubberised slats are being trialled.
After a 20 day transition all cattle are on a standard high quality TMR (Total Mixed Ration) for the feedlot. Everything surrounding the ration and feeding smacks of precision. Precision in that the ration is standardised at 58 to 60% dry matter, at minimum 12 MJ energy density. Precision in that cattle are fed daily into clean troughs with a target dry matter intake per day of 2.2% bodyweight. The TMR is constituted at 12.2 to 12.4% protein but interestingly the heifer feed is topped up to 14% protein in order to keep them growing frame and not getting overfat for the during of the 120 day feeding period. Precision is that water sources are checked daily. Precision in that cattle are checked daily during feeding time for possible health problems.

This is delivering a target 8 to 1 feed conversion efficiency for bulls at a gain of 1.6 kg a day. Heifers are only slightly behind with a feed efficiency of 9 to 1 and daily gain of 1.35 to 1.4 kg a day.

Soya beans and soya hulls are deliberately excluded from the diet to ensure that its non GM status is not put at risk. Feed cost is currently at €2,70 hd/day for the bulls and €2.20 hd/day for the heifers.

When it comes to slaughter time, the bulls especially are handled with TLC and transported with the group mates and slaughtered immediately on arrival at the factory.

This same absolute attention to detail was described later in the day in a paper to the Grassland meeting by beef finisher Patrick O Leary from Trim Co Meath. Finishing young bulls and heifers on a diet similar to Kepak but including some farm made grass silage Patrick and his brother Frank compete with live shippers for the top weanlings.

Within the Charolais and Limousin breeds both Kepak and the O Learys find that the better the quality of the feeding bulls or heifer the higher the chances that they will cover the costs and make a profit.

There is no doubting the quality of the beef produced by the KK farmers and the high standards on the farms, but are the businesses profitable?
During the visit to the Kepak unit budgets for fattening bulls and heifer were shown. In each case a selling price of €3.75 a kg carcaseweight was assumed.

Is this budget, assuming the same selling price for bulls and heifers, the bulls left the higher gross margin. With a staff of 5 including office secretary and manager, plus machinery, lorries etc, the fixed costs are estimated at €70 a head if 5000 cattle/year are put through the feedlot.

At todays prices for store bulls and heifers, farmers will need well over €4 a kg for beef out of sheds next spring. At the Grassland meeting the talk was that deals are being done with some meat plants for €4.20 a kg, but I didn’t see the contracts.

Arising from last week’s item my point was that Soya Hulls is better priced that Citrus Pulp and is higher in protein. Also to in response to queries on bushel weights on barley and wheat, one major pig feed compounder rejects barley that is below 64 and wheat below 69 kph.