This year’s Irish Grassland Association Beef Conference and Farm Walk took place in Ballymahon, Co. Longford on Tuesday 30th June. The theme of this year’s conference was dairy beef and the title was “Dairy calf-to-beef – exploring the potential profit”. The event was kindly sponsored by Bonanza Calf Nutrition. 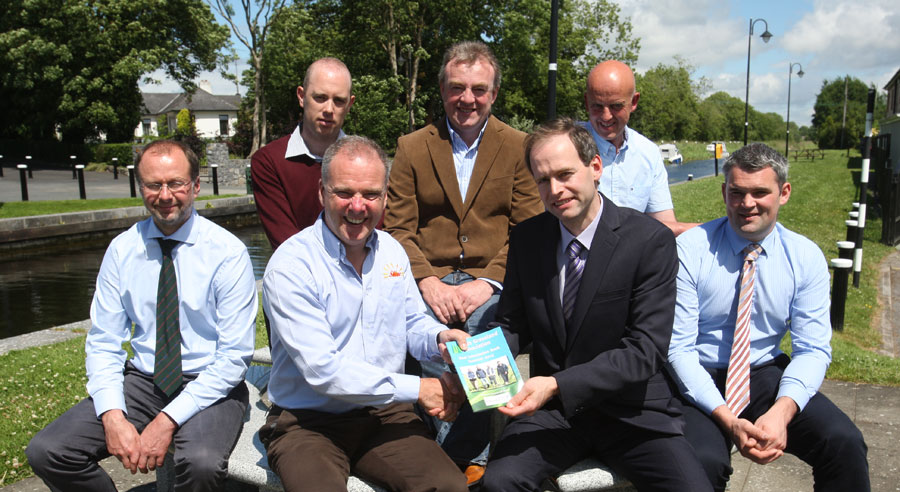 Robert Prendiville, Teagasc presented figures showing greater margins in a Friesian calf-to-steer beef system compared to the bull beef alternatives. He detailed four different systems being trialled in Johnstown Castle, 21 month steers, 24 month steers, 15 month bulls and 19 month bulls. Grass drives the budget for the 21 month and 24 month steer systems, equating to 63% and 52% of the total feed budget, respectively, with concentrates making up 18% and 22% of the budget. This is in stark contrast to the bull systems, which have just 18% grass in the budget for the 15 month bull, and 42% in the budget of the 19 month bull, both well shy of the lower cost steer systems.

To determine the gross and net margins on a per head basis for each system, Robert explained that to work out these margins, a calf cost of €75/head is assumed, concentrates are assumed to cost €255/t and the beef price is estimated at €3.77/kg. Using these figures he estimates the 21 month steer system, which has the least concentrate input to return a net margin of €258/head. This is followed closely by the 19 month bull system at €220/head. However this comes with a caveat; if the overage 19 month bull receives a 30c/kg price discount for being out of spec, the net margin falls to €124/head, well short of the 24 month steer option at €201/head. The 15 month bull is the worst performer returning a net margin of just €67/head. With the low returns from the 15 month bull option combined with the marketing issues associated with the aged 19 month bulls, farmers from the floor questioned if there was a place for a 15 Friesian bull beef system.

Robert also detailed the margins which he said can be achieved through a dairy calf-to-beef system using early maturing animals. He focused on a heifer system taking calf price at €240/head, concentrate cost at €255/t and beef price at €4.22/kg for an O-3- heifer. For the steer system, calf price was €270/head, again concentrate cost was €255/t and beef price was €4.37/kg for an O+3+ animal. The heifer system finishing off grass at 19-21 months has the greatest level of grass in the diet at 72%, followed closely by the 21 month steer system. The lowest meal input was for the 26 month steer finished off grass with just 10% of its total feed budget coming from concentrates. The lowest net margin per head was from the heifer system at €177/head, while the highest was from the extensive 26 month system at €322/head. However, if stock carrying capacity is taken into account, the higher stocking rates achieved in the 21 month steers means that this will return the highest net margin on a per hectare basis at €819/ha, followed by the 26 month steer system at €704/ha, and the heifer system at €619.5/ha. The lowest return on a per hectare basis is the 23 month steer system due to the higher finishing cost during the second winter.

€510 projected margin from AA steers on Farrell farm The afternoon session took place on the farm of Kevin and Mary Farrell and their family. The farm is 188 acres in two main divisions. The farming systems consists of 50 Friesian calves brought to beef as steers under 24 months or bulls under 16 months. The remaining 100 calves are predominantly Angus with some Herefords and these are to be slaughtered off grass in October/November at 19 months of age. The current crop of Angus steers on the farm was bought in at an average cost of €240/head. Over the lifetime of the animal, the total concentrate input is estimated to be between 0.6 and 0.7 t, with the majority of this being fed during the final finishing period. Total variable costs are predicted to amount to €748/head and with a predicted beef price of €4.40/kg (€4.00 base, O+/= €3.88/kg, + 0.12 QA, + 0.4 Triple A Scheme) and a carcase weight of 238 kg the anticipated gross margin anticipated is €510.

However, farmers should be aware that farmers who bought calves earlier this year would have paid €70 to €100 more per head than Kevin paid for the current crop of calves. In addition, the grassland management on the Farrell farm is top notch, because of the ewe enterprise. Calves are never forced to eat out a sward bare which ensures that very high levels of live weight gain can be achieved without supplementation. For most farmers supplementing with 1 kg ration per day over the first grazing period may be necessary where grassland management is poorer, this will increase concentrate costs by approximately €50/head.

The final issue is one of carcase specification. The gross margin highlighted is for animals that meet the target specification for the triple A scheme. Where a carcase grade is lower than O=, the 40c/kg price premium will not be achieved which could see output value drop by about €114/head.

We would like to thank our sponsor Bonanza Calf Nutrition