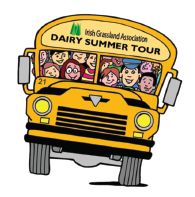 The Irish Grassland Association Dairy Summer Tour will this year visit Co. Louth. The tour will visit two dairy farms close to Drogheda. The farms have different milk production systems with a common theme, both manage their grass to maximise returns from grazing.

At this years’ Dairy Summer Tour the Irish Grassland Association will pose the question ‘do you select the cow for the system, or the system for the cow’? The Dairy Summer Tour will visit two farms in Co. Louth. The farms, while in very close proximity to each other, have contrasting philosophies; one is adapting a grass based system to suit the feed requirements of a high production herd, while the other farm is going the route of selecting the most suitable cow for a grass based system.

The tour will visit Philipstown Farm, home to the Monamore Herd of Holstein Friesians. Tom Kelly is a life long Holstein Friesian breeder and has achieved national and international recognition as an owner, breeder and judge of high quality dairy stock. Tom started milking 40 cows in 1979 as a liquid milk supplier. Today he milks approximately 280 cows on a grazing platform of 96 ha. Approximately 40% of the cows on this farm are winter calving. Breeding is a big focus on this farm, with emphasis placed on type and on milk solids yield. Tom began measuring grass in 2009. Grazed grass is the base feed on the farm from March to October, supplemented as required with concentrate. Cows are fed to yield above 22 litres. During the visit we will discuss Toms breeding strategy and his grassland management system for his high producing dairy cows

The tour will also visit the farm of Andrew Purcell and Alfred McGlew. Andrew and Alfred are both farming since the early 1990’s. In 2007 they formed a farm partnership. At that time Andrew was milking 70 autumn calving cows supplying liquid milk, while Alfred had a herd of 70 spring calving cows on a leased farm. Since forming the partnership they have expanded the farm and today have a milking platform of 90 ha milking 241 spring calving Friesian cows with a quota of 1.2 mn litres. Young stock, which are cross bred Jersey and Norwegian Red are reared on outside blocks of 51 ha. Attention to detail, a strong working relationship, good stock and grassland management are key to why this partnership is working and making 1+1 = 2+. Come and learn the key messages from Andrew and Alfred on making a partnership work.

We are delighted to once again have ACCBank as the sponsor of this exciting event. This is the eight year that ACCBank will sponsor this event. Commenting on the event Sean Farrell, ACCBank, said ” ACCBank is delighted to be sponsoring the 2011 IGA Summer Dairy Tour. We look forward to visiting the Kelly and Purcell & McGlew farms, learning from their recent experiences, and hearing about their plans for the future”.

Early book is strongly encouraged as places will be limited for this event. A special discount registration fee applies to registrations up to and including Wednesday 20th July of €40 for IGA members and €80 for non-members. You can register and avail of these prepaid discounts by:

1. Posting booking form and cheque payable to the IGA to:
DAIRY REGISTRATIONS, IGA, Cookstown, Kells, Co. Meath
2. Making a prepaid registration online www.irishgrasslandcom
3. Calling Maura in our office on 087 9626483. And making a payment by laser or credit card

Please note that as, part of its initiative to attract new members, the conference fee for non members also includes one year’s FREE membership to the IGA (for all new d/d memberships). So, if you are a non member and thinking of attending, then don’t miss out on this excellent offer!

Any registrations after this date will incur a €10 surcharge for members and €20 for non-members.

Update on the Liston Herd, hosts of 2010 Dairy Summer Tour

On the 27th July 2010, the morning session of the Dairy Summer Tour took place on the farm of Aidan, Mary and Fiachra Liston of Ballyaileen, Croom, Co. Limerick. I chaired the session on the Liston farm and one of the issues on the day was the projected performance of the Liston herd for 2010.

The Liston’s, in conjunction with their local Teagasc advisor, Jim Barry, had set a target of 5,100 litres of milk per cow for their 180 cow herd for 2010. I have extracted the following figures from the Tour Booklet from the day. Beside the estimated figures, I have placed the actual performance figures for 2010.

On the day of the Summer Dairy Tour, the audience was sceptical of whether the projected production performance could be achieved. They were right to be sceptical, since milk production on the day of the tour was 18 litres (3.96 gallons) per cow. The cows had lost milk in the days leading up to the tour. Weather at the time was wet, grass was growing rapidly and cows were “loose”.

However, milk production stabilised again the following week and the cows milked as well in September, as they had done for the second half of July.

As every dairy farmer knows, last autumn was a terrific period for milking cows. Yields held up very well throughout the autumn, and grass growth was exceptional.

The Liston’s have a high stocking rate on the milking block (3 cows/ha). Consequently, they began taking action in September to ensure they had grass in the milking cows diet, day and night until drying off. Twenty cows (11% of the herd) were not in calf at the end of breeding season. They were sold at the end of September. The first lactation animals were dried off from the middle of October.
The really bad frost in the last few days of November made up Fiachra Liston’s mind to dry off the rest of the remaining milking cows (total 80). These were dried off, on the 2nd December. The annual milk recording records for the Liston’s herd for 2010, shows that the herd milked, on average, for 271 days in 2010.