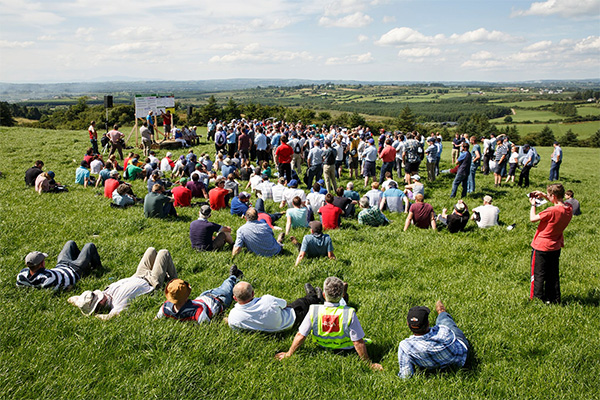 Dairying on more challenging soils was the theme of this year’s Irish Grassland Association’s Dairy Summer Tour which took place on Tuesday 19th July sponsored by Allied Irish Banks. Four hundred dairy farmers attended the event based at the Green Glens Arena in Millstreet and visiting host farms near Kiskeam, County Cork and Rathmore, County Kerry. An estimated 4.4 million hectares of the land of the Republic of Ireland is classified as lowland mineral soil while a further 1.5 million hectares of land is classified as mountain and hill land. Approximately one third of the lowland mineral soil category (1.4 million hectares) is classified as wet land. As much as one third of Irish milk is produced on either heavy or elevated soils. Inclement weather conditions have the potential to add complexity, cost and risk to the milk produced on such soils. 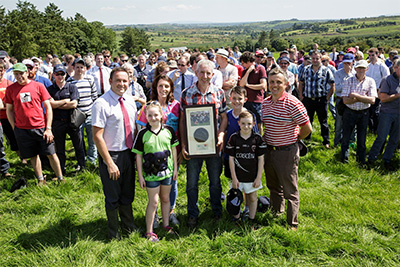 Sean and Liz farm at Knocknenaugh, Kiskeam, Co. Cork. This year the 80 ha farm is grazing 100 dairy cows. Overall farm stocking rate was 1.5 LU/ha with the 40 ha milking platform stocked at 2.5 cows/ha. Sean also reared 30 replacement heifers this spring and has cut pit silage on the out farms to support the dairy herd. In 2015 milk solids production was 422 kg milk solids per cow (4.21% fat; 3.65% protein). Current herd EBI is €178 (€51 milk sub-index; €93 fertility sub-index). Last year cows were housed part-time by October 20th and full-time by 10th November. They spent an average of 274 days in milk last year. The herd was fully dried off by the 15th December. Housing consists of slatted cubicle accommodation for both cows and replacements. The first cow calved on February 5th, the median calving date was February 29th and the 6-week calving rate was 77%. Spring 2016 was wet and cold and cows were turned out to grass full-time on March 10th but spent approximately another week indoors on and off until early April. The first rotation ended on April 28th.
The O’Riordans are participants in Teagasc’s Heavy Soils Programme. The milking platform land base has been assessed and comprises 0.3-1.0 m of high clay content top and sub soils overlying stony soils on top of shale bedrock. On view at the farm walk was a paddock which has been improved using a network of shallow (1.1 m deep) gravel-filled drains. To ensure the rain drains through the tightly consolidated top and sub soils to these drains, a subsoiler was used to crack the top and sub soils to improve drainage. Adjacent to the improved paddock the audience looked at a similar paddock that was reseeded at the same time without drainage.

Dr. Pat Tuohy of Teagasc Moorepark discussed the principles underpinning improvement of more challenging soils at the event. According to host farmer Sean O’Riordan, “Draining the paddock has been very successful. What was once one of the wettest paddocks on the farm is now one of the driest. I can get the cows out on it earliest in the spring and latest in the autumn if I want to. Grass yield has increased by an average of 4.5 t dry matter per hectare per year. In fact the drained paddock is now one of the highest yielding parts of the farm”. According to Teagasc’s Ger Courtney, the drainage will have paid for itself within five years, “Taking a value of €200 per tonne utilised and assuming that 3.5 t dry matter extra is utilised per hectare, that’s worth €700 per hectare. It cost just under €3,500 to complete the drainage of the paddock so it will have paid for itself within five years”. 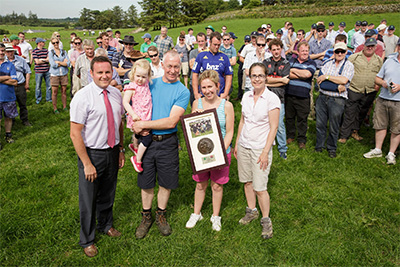 Conor and Eilisha farm at Gortnagown, Rathmore, Co. Kerry on an elevated, steeply sloping farm (200-300m above sea level). The farm comprises 43 ha of owned land in two divisions. The out farm, located approximately 20 km from the milking platform, is used to rear the 18 maiden and 40 weanling replacement heifers currently being reared. The milking platform is adjusted to 26 ha. The majority of it has been reclaimed over the 1997-2005 as he sold off blackface mountain ewes and replaced them with dairy cows. Underlying 10-30cm of topsoil, a deep gravelly layer of subsoil provides good drainage once reclaimed. Similar to the O’Riordans, the farm is in a high rainfall area because of the elevated nature (200-300 metres above sea level) and aspect of the farm. It also received 1.95 m of rain last year.

Overall farm stocking rate was 2.73 LU/ha in 2015 with the milking platform grazing 97 cows (stocked at 3.73 cows/ha). In 2015 the milk solids yield was 413 kg per cow (4.54% fat; 3.73% protein) from a predominantly Friesian Jersey crossbred herd. Cows spent an average of 288 days in milk last year with 75% of the herd milked through the month of November while grazing by day, to ensure that a long lactation was achieved. Housing consists of slatted cubicle accommodation for both cows and replacements. Meal fed averaged 580 kg per cow in 2015 with 15.5 t dry matter grown per hectare on the milking platform. Current herd EBI is €178 (€63 milk sub-index; €81 fertility sub-index). The genetics of the herd is 40% Holstein Friesian; 40% Jersey; and 20% British Friesian.
This year the first cow calved on February 11th, the median calving date was February 26th and the 6-week calving rate was 96%. Cows were turned out to grass part-time from mid-February, housed full-time for a week in early March and turned out again from mid-March. The first rotation ended on April 10th, 250 kg meals had been fed up to the date of the Summer Tour per cow and no more will be fed until the autumn if grass growth continues as expected.
Conor places huge emphasis on the number 500; 500 kg liveweight and 500 kg milk solids are two target figures he spoke about on the day. ‘I’m looking closely at not just milk and fertility but also the maintenance sub index. I won’t select anything less than €30 for maintenance. When I ran it through Sire Advice this spring I only found 6 bulls that were suitable”.

Farming on a high rainfall area on shallow soils Ger Courtney, Teagasc said, “Almost 1 tonne of lime was lost per hectare per annum between 2011 and 2015 on this farm. At Conor’s high milking platform stocking rate phosphorus off take is 30 kg per hectare per year. Conor now soil samples every year to keep a close eye on changes in soil pH and P and K indexes”.

Commenting at this year’s Summer Tour, Donal Whelton Agri Advisor, AIB said, ‘We were delighted to continue our support of the Irish Grassland Association Dairy Summer Tour. As always it turned out to be a most informative, stimulating and well organised event. This year’s event provided a further opportunity for farmers to learn first-hand from two progressive dairy farmers who are farming on more challenging soils. The fundamentals of grass and maintaining efficiencies are key for all farmers, particularly in a period of volatile milk prices’.