The Irish Grassland Dairy Summer Tour sponsored by AIB went to West Cork on 26th July. Nearly 400 farmers visited the O’Donovan Family based in Skibbereen and the Shannon Family based in Ballinascarthy. The theme of this year’s tour was “Growing the farm business”. 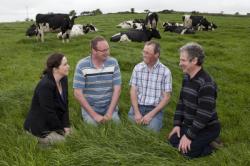 The O’Donovan story – Expansion on a large land base

The O’Donovan’s story starts back in 1976 when Derry and Anna got married, two year later Derry’s father had the foresight to hand over the reins to Derry when he was 26 years old. In 1978 the farm consisted of 54.6 ha and 95 cows supplying around 500,000 litres to Drinagh Co-op. The farm now consists of three milking platforms and two young stock blocks totalling 399 ha milking and almost 600 cows supplying over 2.3 million litres to Drinagh Co-op. Derry, Anna and two of their sons Norman and Damien are involved in the business. The massive expansion on this farm has happened by adding additional land through leasing and purchase, and operating a low cost spring calving system. The Dairy Summer Tour visited Norman’s milking platform at Ilen Farm but most of the farm details presented related to the whole farm business.

Derry described the lessons learned along the way from milking 100 to over 600 cows. Cow type has changed dramatically since Derry started farming. In the early years the O’Donovan herd evolved to a high producing Dutch Holstein Friesian herd milking over 6,000 litres (1,300 gallons) in all year round milk production. Derry said “Herd fertility was poor and dis-improving, and maintaining the herd was costing a lot in veterinary calls.”

Approximately 15 years ago the O’Donovan’s started using New Zealand Friesian semen to reduce cow size, improve herd health and fertility, and produce more milk solids. Over the last number of years the policy has moved to using Jersey crossbred bulls on the predominantly Friesian herd. The target is to have a cow producing 420 kg of milk solids on a grass based diet calving compactly in the spring and consuming less than 500 kg concentrate.

A farming trip to New Zealand in 2002 started a major change in direction for the farm when the difference between ‘cash flow’ and ‘profit’ became apparent. At that time the farm had gross output of 35 c/litre but costs were extremely high at 88% of gross output. A family decision was taken to move out of all year round production, away from purchased feed and growing maize, to allow a clear focus on growing grass and spring milk production. A clear policy on reducing costs and managing costs was implemented. Stocking rate on the milking platform is currently 2.3 LU/ha and grass utilisation is 9.2 t DM/ha. For the last three years costs have been maintained at 61% of gross output.
Norman told delegates “All expenditure is questioned and investment in sheds and housing is minimised. We are not afraid to house dry cows on slats and housing is not plush but it’s adequate.” Derry made the point that when all borrowings were cleared in 1997 the business got caught in a comfort zone and the farm business stagnated for five years. The clear message given to farmers attending the walk was ‘work on the business, not in the business and borrowed money helps focus the mind’.

The West Cork ethic of hard work is clear to be seen in the O’Donovan story. Damien summed it up at one stage when he said “it can only go wrong but we won’t let it go wrong because we’ll work at it.” As Norman and Damien committed to the family business it has grown from strength to strength and will grow even more once the quota brakes come off. All three herds are currently on once-a-day milking and by 2020 the O’Donovan’s expect to be milking 1000 cows producing over 4.2 million kg milk solids, a truly impressive performance.

The Shannon story – Expansion on a limited land base

Robert Shannon is farming with his wife Shirley and four children just outside Ballinascarty in West Cork. Over the last five years Robert has more than doubled herd size to 83 cows currently with a quota of 568,261 litres in a split autumn/spring calving system supplying milk to Lisavaird Co-op with over 30% supplied during the winter months for the Carbery Winter Milk Scheme. Young stock are contract reared four miles away.

What Robert is doing will interest a lot of farmers in Ireland as he has not gained access to extra land but instead has increased stocking rate of cows on his current grazing platform. He is now stocked at 3.8 cows/ha on the grazing platform all year round, with whole crop silage bought in as the main winter feed. Robert is measuring grass for a number of years and last year he utilized 13.5t DM/ha.

The herd is split calving with roughly 40% calving in autumn and 60% in spring. Robert feels that the split calving is very advantageous in terms of grassland management, “the winter system is driving the spring system, with the dry cows from the winter milk herd I can clean up paddocks and get the best of grass into the milkers from this time of the year onwards. I would see of a benefit of +0.15% in the protein when grass quality is ideal,” he said.

Excellent animal performance is one of the striking features of the farm. Robert’s cows are a great example of what can be achieved with a focused breeding programme. Herd EBI is currently at €130 (ranked in top 10% nationally) with an almost even split of €58 from milk and €61 from fertility. The milking herd consists mainly of pedigree Holstein Friesian with a small number of pedigree Jersey and a few crossbreds. Last year’s profit monitor has average cow yield of 7,314 litres at 4.03% butterfat and 3.69% protein, that is 582 kg milk solids/cow. To achieve this level of milk solids production Robert is feeding one tonne of concentrate/cow. Robert’s feed cost/litre for 2011 was 4.12 c/l.
Robert is passionate about cow breeding and bred the very successful bull Ballydehob Justice (BYJ) who has nearly 700 daughters milking in Ireland at the moment. Thirty eight cows from the 83 in the herd currently have OJI in their bloodlines so he has to select his bulls carefully to avoid inbreeding.

Growing the herd organically from his own stock was something that put strains on cash flow as replacement sales were a big part of Robert’s business. In terms of expanding the herd, complying with the Nitrates Directive was one of the most challenging aspects in Robert’s opinion. The solution to this for Robert was contract rearing – land that was being used to rear heifers could now be stocked with cows and used to generate a greater return.

Many farmers considering expansion will struggle to get their hands on extra land to expand cow numbers. Robert feels that 3.8 cows/ha (similar to 3 cows/ha if making winter feed on farm) is near the maximum he would go. He is a great example of what it takes to make this system work – high EBI cows delivering excellent milk solids, focused grassland management to achieve the most from grazed grass and a strong focus on costs, with the whole system achieving strong profits. Attention to detail has been a key part of his success to date. To quote Robert “For this farm 2015 has happened here already”.