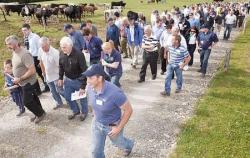 There was lot of bull at last week’s Irish Grassland Association (IGA) beef conference and farm visit. First up with bulls was Dermot O Connor, Carlow, member of the Better Farm Programme. He spoke of augmenting his suckler herd with a dairy bull calf to beef enterprise in his effort to hit a gross margin of €1,000 per hectare. He opted for dairy bulls rather than extra sucklers on the basis of the investment cost, higher budgeted return and personal preference.

Next up, was winter finisher Eamonn Power from Clonmel. He has switched from steer finishing to finishing weanling suckler bulls. Even with bulls, Eamonn needs a beef price of 371 c/kg (£1.32/lb) next Spring to cover the dearer meals and dearer weanlings. His weanling price budget is set at about €1.80 per kg liveweight. Belgian Blue weanlings are excluded.

Finally there was the farm visit to the father and son team of John and Paul Duggan, Portlaw. Here we saw choice export quality suckled bulls. John Duggan is an agent for the Dawn Meats but his own stock are more likely to be shipped live as weanling bulls and heifers. Belgian Blue is the sire of choice for the Duggans. They are moving towards ¾ Limousin dams, although it was interesting to see that most of the dams of the top calves, were black Lim X Friesians.

It’s not a coincidence that these farmers are into bull production. The IGA seeks out the beef enterprises which are profitable. With their extra growth potential and efficiency, bulls offer a better chance of making profit from beef. In the current Irish factory cattle kill, 1 male animal in 5, is a young bull. The trend towards rearing bulls on Irish farms is steadily upwards. When it comes to marketing Irish beef, Bord Bia and the Irish export plants palce the bulls behind steer beef. However plants are resigned to having to handle more bulls.

Speaking at the IGA event Paul Nolan senior executive with Dawn Meats said that his company was looking at the possibility of an extra 350,000 dairy bred bulls coming on stream from a post quota expansion of the Irish dairy herd. “Along with Teagasc in Johnstown Castle we are looking at the feasibility of dairy bull beef at 8 mths, at 12 months and at 16/18 months”. He warned farmers to suss out market outlets before embarking on novel bull beef systems. “The market couldn’t absorb a sudden flush of such a product” Mr Nolan told the IGA delegates. Then again sexed semen could be a bigger factor by the time the milk quota is gone. Sexed semen has the potential to solve the problem of unwanted male calves from the dairy herd.

The Dawn Meats boss refrained from predicting a factory beef price for next but did accept that an Autumn to Spring price differential of 30 to 35 cent/kg was needed to cover the extra cost of winter fattening. “Within Europe there is very little seasonality in beef prices. 99% of Irish beef is now sold into this generally flat priced market.” Mr Nolan welcomed the introduction of the Better Farm programme. “Our beef customers are impressed with the high grass usage and also the documentation of costs on these farms. This hands-on information impresses visiting supermarket buyers .

Bulls have the potential for efficiency and growth, but they are most suited to indoor finishing. Also bulls need very good management. If they develop into underfleshed stags they will be heavily discounted. But Irish farmers need to be able to put on cheap weight on bulls at grass. At grass the grazing of bulls is helped by smaller numbers, good weather, mixing with steers, absence of dairy breeds, and keeping them away from females. Grazing Holstein Friesian bulls late into a wet Autumn can be a disaster.

Who will grasp the BVD nettle?

Ireland is being left behind in the European race to eradicate the Bovine Viral Diarrhoea Virus (BVD), the Grassland meeting was told by Joe O Flaherty of Animal Health Ireland (AHI).
He said that many countries in Northern and central Europe have practically eliminated this damaging virus. Scotland is embarking on an eradication programme and that it will be made illegal to sell an animal Persistently Infected with the BVD virus. He envisages a situation where Irish breeding heifers will be banned from Scotland if not from the whole of the UK.
BVD damages the immune system and has been implicated in scour, infertility and pneumonia on Irish farms. Farmers that have tackled and got rid of the disease from their herd have seen a huge benefit in herd health.
However the AHI boss warned that experience in other countries showed that BVD eradication must be done on a national or regional basis. AHI will shortly make a recommendation on a BVD eradication programme. In the absence of an official Department of Agriculture programme, the baton falls to farm organisations to take the lead on it. The preference is for a 32 county programme. Northern Ireland BVD expert, David Graham is shortly to take up a role in AHI.