How to cut the cost of growing grass 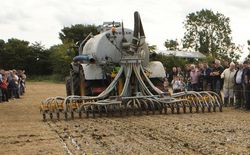 On 24th May the Irish Grassland Association (IGA) held a “Live” Grass Machinery Demonstration that focused on low cost grass production on the farm of Mr. Patrick Murtagh, Doon, Virginia, Co. Cavan. This special member’s only event attracted a crowd in excess of 200 delegates. The event focused on a number of areas that demonstrated to farmers various way to significantly reduce the cost of growing grass including live demonstrations and presentations on:

IGA demo shows how to cut the cost of growing grass

By Derek Casey Irish Farmers Journal I am featuring a couple of machines that farmers can choose from for reseeding grass – the Sumo Moore Unidrill and the Cross grass reseeding drill. I also look at what farmers can do to improve their fertiliser spreading accuracy, as shown at the recent Irish Grassland Association demo held in Cavan.

Sumo Moore Unidrill
The Sumo Moore Grassland Unidrill is a new arrival on the market and it was demonstrated at the IGA event on the farm of Patrick Murtagh in Virginia. Speakers from the IGA, Teagasc, Goldcrop and industry as well as local contractors focussed on a number of areas that should significantly reduce the cost of growing grass. Presentations were given on clover sowing, slurry injection, fertiliser spreader calibration, proper usage of fertiliser, soil analysis and weed control.

The Sumo Moore Grassland Unidrill pictured is owned by Grangegeeth, Co Meath contractor, Pat Keally. Pat told me that he bought the machine last season from Sam Moore in Northern Ireland for about €25,000 including the Accord seed hopper. He told me this drill weighs 2.5 tonnes and it needs about a 140hp tractor.

This machine uses close row spacing (32 discs spaced 3.5 inches apart) so that one pass seeding can be made into either a grass or cereal stubble or a conventionally tilled seedbed. It uses a compact three point linkage mounted chassis for quicker headland turn performance in smaller fields, and a central seed metering system for sowing combined. Sam Moore says it has the ability to sow down to the very last seed quantity with all seed types.

The soil engaging unit is from the proven grassland Unidrill on a trailing rubber suspension arm. Unlike the Guttler or the Cross machines, the Moore machine uses discs. It places small seeds down into the soil (at the correct depth) through the use of single disc and seed tube coulter arrangement.

During the demonstration at the Irish Grassland Association event, the Moore drill was placing clover seeds near the top of the surface because placing them any deeper would have damaged germination rates. Pat was sowing the clover at a rate of 2kg/acre. The following red prism roller is similar to the one found on the Guttler machine and it serves the same role – a firming roller to ensure good soil to seed contact.

With the Unidrill new seeds can be introduced into existing swards, either by seeding directly into glyphosate sprayed off grass stubbles, or by stitching in without chemical, using cultural control of the existing sward. Seeding into stubbles or conventionally tilled seedbeds can be easily done as well. Apart from clover and grass seed, this unit could also be used for sowing the likes of kale and rape.

The Grassland Moore Unidrill, unlike the Guttler Greenmaster or the Cross seeder, places seeds down into the soil through the use of single disc and seed tube coulter arrangement.

At the IGA event farmers also heard from David Borland of Farmhand, who are distributors of the Amazone range of fertiliser spreaders. David spoke about how to go about calibrating your fertiliser spreader and the different equipment that is involved in doing that job. He explained that farmers have a choice for this job; they can either pay the machinery dealer to do it for them or, alternatively, they can buy the trays and measuring kit themselves for €250 plus VAT.

My own view is that at current fertiliser prices that is a very reasonable price because once you have the trays you can use them as many times as you want to keep your spreading accuracy at a high standard. However, David said most farmers prefer to drop the spreader into their local dealer for calibration.

Whatever route you take, the important thing is that it gets calibrated preferably once a season or, at most, once every other season.

The tray test is simple.

First, a run through the trays is made with the tractor and spreader, as it would be operated in the field.

Fertiliser collected in the trays is then transferred into test tubes and the contents are recorded.

From this something called the Coefficient of Variation (CV) is found by measuring the variation in each tray from the average. The lower the CV the better; a CV of 10-15% is acceptable and will prevent crop striping. However, surveys indicate that a lot of spreaders in use today have CVs of 30% or more. For cereal spreading, research shows that improving the CV from 30% to 10% will bring a yield benefit of around 0.25t/ha in wheat. If the result of the first run is unsatisfactory, adjustments are made to the spreader settings and other runs are done until an acceptable CV is obtained. These adjustments could involve any number of issues.

The spreader David was using was a two tonne Amazone ZAM Stockman III, which is priced at €6,870 plus VAT. The two tonne spreader is a handy size because it can take three of the big 600kg bags.

Some other tips for fertilizer spreading are;

• The spreader needs to be 0.75m from the ground. If you don’t have a measuring tape, as a rule of thumb the spreading discs should be higher on the back than on the front
• Ensure the top link is set at the correct level
• Tighten the lift arm stabilisers to prevent the spreader rocking on rough ground, and make sure both lift arms are level to minimise bias
• It is essential to maintain the same forward speed all the time, e.g. 10km/hr
• At the headlands, shut off the spreader once the back wheels of the tractor meet the inside track of the headland run. This prevents covering an area all ready spread.
• Remember fertiliser is thrown backwards as well as sideways. If your spreading width is 12m, wait until you are 9m out from the ditch before turning on. Again, this prevents wastage.
• Cover the spreader hopper to keep the fertiliser dry and spreadable
• Check the spreading vanes for wear; vanes on a 12m spreader typically last 3-4 seasons, an 18m spreader 2-3 seasons and a 24m spreader 2 seasons. A new set of vanes cost from €350-€450.

This machine wasn’t at the IGA event, but I saw it working in Athlone recently and it is another reseeding option for farmers. Manufactured by Cross Agricultural Engineering in Rathangan, Co Kildare, it works on a different principle to the Moore drill insofar as discs are not used to place the seedlings and it is a trailed unit rather than a mounted one. Rather than being placed with a disc and coulter arrangement the seedlings are blown down onto eight metal plates located behind the second row of tyne harrows. Cross Agricultural Engineering say that blowing the seedlings down onto the splash plate type plates gives them a cascading effect, thereby spreading the seed down onto the soil. Simon Cross explained; “In my experience farmers don’t want the grass or clover seed to be dropped in straight lines as you would find with barley seed, for example, because it can take too long for it to tiller up properly.”

I saw the machine working recently and there definitely appeared to be a good spread of seed across the full 3m working width of the drill. As can be seen from the picture, two rows of flexible tyne harrows at the front are tasked with the job of ripping out mosses, dead grasses and weeds. The angle of these can be varied to change the aggressiveness of the action wanted depending on the type of ground you are working on.
After dropping the seed onto the ground the final component of the Cross seeder comes into play; the ring roller. This serves to ensure a good seed to soil contact, while the possibility of capping is avoided because of the roller’s ring formation. Of course, this machine can also be used as a conventional roller in silage ground with the tynes lifted clear.

The Cross seeder can handle very small seeds such as rape, kale, clover and slug pellets. It has a see-through plastic hopper so that the seed level can be easily monitored from the cab. The hopper takes around 84kg (six bags) of seed, allowing you to sow up to seven acres at a time.

For road transport a hydraulic ram pushes down the axle and the wheels take the weight of the unit. List price of this drill is €16,500 plus VAT.

After dropping the seed onto the ground the final component of the Cross seeder comes into play; the ring roller. This serves to ensure a good seed to soil contact, while the possibility of soil capping is avoided because of the roller’s ring formation. 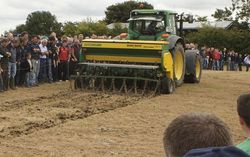 This outdoor “live grass machinery demonstration” is a follow up to the very successful “live reseeding demonstration” held in the North East in August last year click here to review this event and view film footage of machines.