The Irish Grassland Association has awarded the Lifetime Merit Award to Matt Ryan for services to Irish grassland farming. To say that he is a most worthy recipient of the award is an understatement. Matt has devoted his entire career to furthering the economic value of grass as the main source of forage in the diet of livestock. He continues to be a passionate and outspoken advocate of maximising grass production and utilisation to enhance the profitability of milk and meat production in this country. The Lifetime Merit Award was presented to Matt at a special dinner in Cork on the eve of the IGA Dairy Summer Tour.

Matt Ryan spent much of his early career with Teagasc, culminating in his appointment as Dairy Programme Manager in 2004, a novel role created by Michael Galvin, Teagasc deputy director at the time. It was in that role that Matt drove the Discussion Group model as the ideal way to transfer information and grass management skills to farmers. Since his Teagasc career concluded it is no surprise that Matt continues to work at what he loves – driving dairy farm productivity and encouraging a decent work/life balance amongst his clients in his job as a dairy consultant. His own work/life balance still includes finding time for hurling and rugby matches among a range of other interests. Since retiring from his Teagasc career, Matt Ryan continues his advocacy of cost effective, grass-based milk production, co-ordinating six Discussion Groups around the country with another Group based in Scotland also availing of Matt Ryan’s consultancy services.

Noel Culliton worked with Matt Ryan for many years and below is a citation from Noel that was delivered on the occasion of Matt receiving his Lifetime Merit Award.

“I have known Matt Ryan for most of my career. I would find it hard to find a man more dedicated to the job of improving the efficiency of Irish grassland farming.

Matt’s great gift is that he understands the potential of grassland to provide a good living for farmers. He realizes that the potential for profitability can be greatly improved if the grass is utilized efficiently.

Matt is a great believer in detail and every management tool is examined against a background of what it does to costs of production. Matt Ryan was one of the first to promote out-of -season grazing, he was one of the first to promote flexible rotational grazing. He appreciated the value of reseeding, provided it was done properly and the right grass seed mixture was used. Matt was forensic in his examination of the components of management systems and was never afraid to point out weaknesses when he detected them.

In my time as a grassland researcher, I used to love to attend meetings with Matt. You needed to have your facts well marshalled. If you said something wrong or unproven, he would point it out very forcefully. The result was that the calibre of discussion was always excellent and I always went away invigorated and determined to try harder to get more and better information on whatever we discussed.

Matt’s other great gift was his communication skills. Matt Ryan believed in, and encouraged the widespread establishment of dairy  discussion groups in Ireland. It was largely due to Matt that farmers empowered each other in their efforts to improve their profitability. This is normal nowadays but when it started it was close to revolutionary. It has surely proved to be one of the best advisory tools in modern farming

I believe Matt Ryan has brought enormous benefits to grassland farming. I have no doubt that there are numerous farmers all over this country that owe a tremendous amount to Matt Ryan for the help he gave them.

I am delighted that the Grassland Association has decided to honour him for all his achievements.

Finally, I want to congratulate Matt on receiving this much deserved award.” 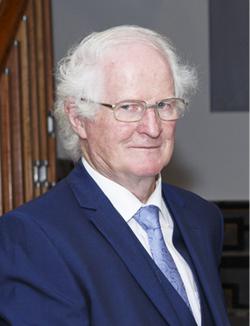 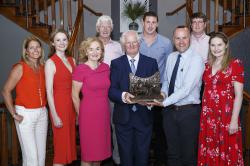 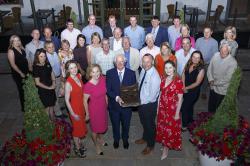 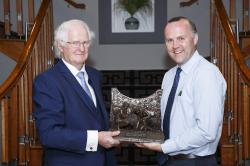